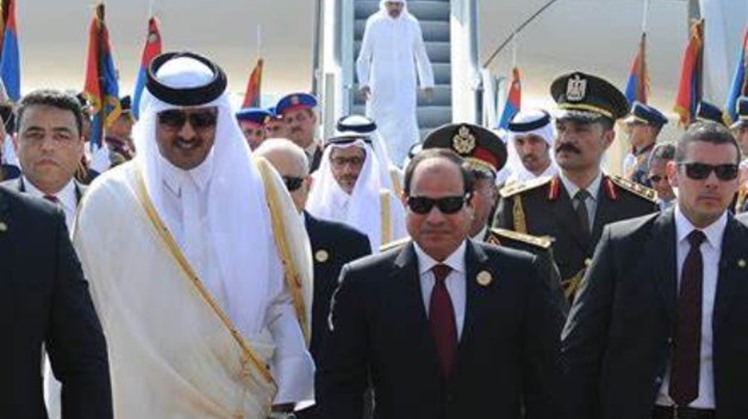 President Sisi's visit to Doha comes as a “culmination of the intensive mutual discussions between the two brotherly countries during the recent period to strengthen the frameworks of joint bilateral cooperation at all levels,” the Presidency explained in a statement.

During the Doha visit, Sisi and Qatar's Emir Tamim will address the most prominent axes of bilateral relations binding the two brotherly countries.

They will also discuss regional and international issues of joint concern and the concerted efforts required in this regard to protect Arab national security.

Qatar’s Emir Tamim made an official visit to Egypt in June for the first time since a rift between Qatar and the quartet of Egypt, Saudi Arabia, Bahrain, and UAE that started in June 2017 and ended in January 2021 under Al-Ula reconciliation deal signed in Saudi Arabia.

Since the reconciliation, Egyptian and Qatari officials have been holding rounds of talks to enhance their bilateral relations.

During his June visit, Qatar’s Emir met with Sisi, where they agreed on enhancing bilateral cooperation in various fields.

Sisi and Sheikh Tamim held bilateral talks individually followed by an expanded meeting between the delegations of the two countries, a statement by the Egyptian Presidency read.

The two leaders agreed on enhancing cooperation between the two countries in the fields of agriculture and energy in addition to trade exchange and boosting the flow of Qatari investments in Egypt.

During the meeting at Al-Ittihadiya Palace, Emir Tamim affirmed Qatar’s keenness to continue joint steps with Egypt to enhance bilateral cooperation mechanisms between the two countries during the coming period.

This comes through maximizing Qatari investments in Egypt and making use of the wide range of investment opportunities in Egypt.

He hailed the Egyptian community’s contribution to the process of building and development in Qatar in various fields.

Sisi affirmed that Emir Tamim’s visit to Egypt embodies the progress witnessed by the Egyptian-Qatari relations and paves the way for developing these relations during the coming period in various fields.

Emir Tamim, for his part, congratulated Sisi ahead of the anniversary of 30 June 2013 Revolution, hailing the wise policies Egypt adopts under Sisi at the domestic, regional and international levels.

Sisi and the Qatari emir discussed regional developments, where they agreed on the need for concerted efforts by Arab countries and the enhancement of joint efforts by the two countries in dealing with the various crises facing the region.

The Qatari emir hailed Egypt’s ongoing steps within the framework of Gaza Reconstruction. The leaders agreed on the importance of work to revive the peace process to reach a fair and comprehensive solution to the Palestinian cause in a way that ensures the legitimate rights of the Palestinian people within the references of the international legitimacy.

The leaders discussed ways of dealing with the negative implications of the Russia-Ukraine crisis on global economy.

They also affirmed the need for concerted efforts by the international community to face terrorism and extremist thought within a comprehensive strategy that addresses all intellectual and developmental dimensions of this phenomenon besides security confrontation.

They also welcomed the anticipated summit that Saudi Arabia will host for leaders of the Gulf Cooperation Council (GCC) countries as well as Egypt, Jordan, Iraq, and the United States.

In a tweet following the visit, Qatar’s emir he discussed with Sisi means of enhancing bilateral relations in all fields.

The Qatari emir said he and Sisi discussed enhancing and activating joint Arab work in a way that meets the aspirations of the Arab peoples in development and stability and supports security of the region and the world.

Sisi bid farewell to the Qatari emir, who paid Egypt an official two-day visit for the first time in seven years, after holding bilateral discussions in the Egyptian capital.

This is the first visit by the emir to Egypt since the two countries agreed on resuming bilateral relations in January last year after more than three years of diplomatic rift.

In June last year, Sisi sent an invitation to the emir to visit Egypt at the earliest opportunity, according to a statement by the Egyptian Ministry of Foreign Affairs. The invitation was sent by Egyptian Foreign Minister Sameh Shoukry in Doha.

In February, both leaders met on the sidelines of the opening ceremony of the 24th Winter Olympics Beijing.

They also met in August 2021 for the first time in more than four years since severing ties on the sidelines of the “Baghdad Cooperation and Partnership’ conference.

The meeting in June came a few days after Egyptian Minister of Finance Mohamed Maait and his Qatari counterpart Ali bin Ahmed Al Kuwari signed a memorandum of understanding (MoU) on the sidelines of the Qatar Economic Forum to foster joint cooperation.

The MoU seeks to coordinate financial visions, positions, and policies at the bilateral level and in international forums.

It is also meant to exchange expertise in the fields of taxation, customs and financial policies in a way that contributes to achieving economic and development goals.

The president valued the remarkable progress in Egyptian-Qatari relations, which will serve the two countries' peoples' interests, asking for conveying his greetings to the Qatari emir.

Meanwhile, Sheikh Mohammed lauded Egypt's pivotal role in the region as a main pillar for the Arab world's security and stability, as well as its keenness to bolster solidarity among the Arab countries.

During Sheikh Mohammed’s visit, Cairo and Doha agreed on $5 billion in Qatari investments in Egypt. The two countries also agreed on establishing a joint higher committee.

The recent bilateral visits between the two countries come after rounds of bilateral talks to restore their relations.