Egypt’s Sisi back from Kuwait after holding talks with emir, crown prince, PM 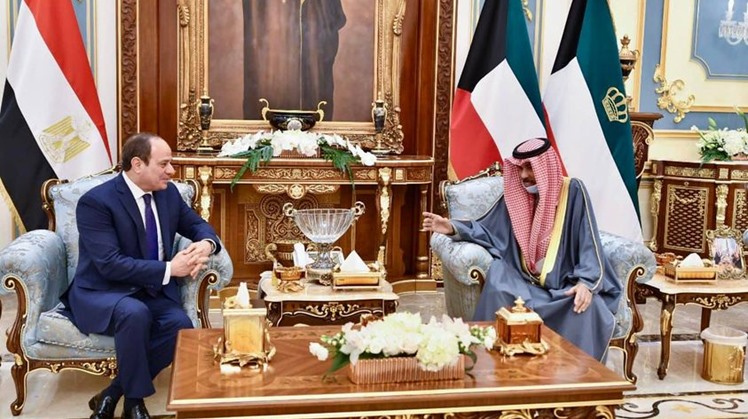 Wed, Feb. 23, 2022
CAIRO – 23 February 2022: President Abdel Fattah El-Sisi arrived back in Egypt on Tuesday, Presidential Spokesman Bassam Radi said, after a key one-day visit to a Kuwait, during which he met with the Kuwaiti emir, crown prince and prime minister.

Tuesday’s meetings come shortly after Egypt hosted the fourth conference of the Arab Parliament. Following the conference, Sisi held a meeting in Cairo with Speaker of the Kuwaiti National Assembly Marzouq Al-Ghanim.

Meeting with the emir

In his meeting with Emir of Kuwait, Sheikh Nawaf Al-Ahmad Al-Jaber Al-Sabah, Sisi stressed Egypt’s care about the security and stability of Arab Gulf countries in the face of internal and external challenges, as they are integral to Egypt’s national security, the spokesman said.

The president equally valued - during the meeting held in Kuwait - the current level of coordination between both states, and the resemblance in their views on issues of mutual interest, given they both aim for repelling various challenges facing the Arab nation at the current period.
In turn, the Emir of Kuwait valued the prominent role played by Egypt to consolidate joint Arab work in the face of contemporary crises, which is crucial to maintain socio-economic developmental endeavors.

The president and the Emir conferred over a number of Arab and regional issues of mutual concern as well as efforts deployed to combat terrorism and extremism, and promote tolerance and moderation on a regional scale.

In another context, Sheikh Nawaf pledged to expand economic cooperation with Egypt, particularly on the front of boosting Kuwaiti investments in the country.

Sisi began his visit to Kuwait by holding a meeting with Crown Prince Sheikh Mishal Al-Ahmad Al-Jaber Al-Sabah, who had received him at the airport upon arrival, the spokesman said.

On his side, the Kuwaiti crown prince expressed his country’s keenness on periodic consultations with Egypt on various issues, describing the Egyptian role as a cornerstone in Arab security, and solidarity among Arab states.

The crown prince affirmed Kuwait’s eagerness to bolster cooperation with Egypt on all levels, commending the contributions of the Egyptian community in building and developing his country.

The presidency’s spokesperson indicated in a press statement that President Sisi and Sheikh Mishal exchanged views over the most salient matters on the regional scene.

Meeting with Kuwait’s Prime Minister Sabah Al Khalid Al Sabah, Sisi voiced his appreciation for the close and historical relations that bring together the two brotherly countries at the official and popular levels as well as the extended social and cultural relations.

For his part, the Kuwaiti prime minister stressed his country's keenness to elevate cooperation with Egypt to the level of strategic partnership in the benefit of the two brotherly peoples and as a cornerstone for maintaining regional security and stability and restoring balance to the region.

This comes in light of the pivotal importance of Egypt regionally and internationally, the prime minister added.

The meeting witnessed a review of ways to advance the solid bilateral relations between the two brotherly countries in various fields, especially in light of the upcoming holding of the Egyptian-Kuwaiti joint committee.

It was agreed that the committee’s work would focus on strengthening cooperation in the field of investment and economy between the two countries, the spokesman added.