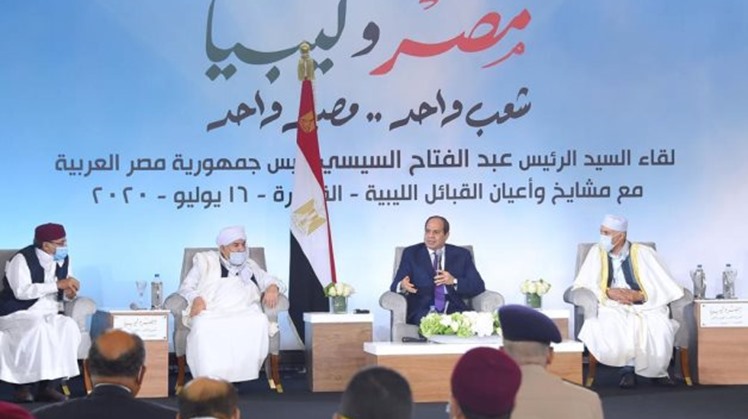 Egyptian presidential spokesman Bassam Radi said that the two sidesexchanged views on the developments of several international and regional files, most importantly the situation in Libya.

Sisi affirmed Egypt's firm strategic position towards the Libyan crisis, which aims to restore stability and security. He called on all Libyan parties to engage positively and constructively in the various tracks emanating from the Berlin Summit and the Cairo Declaration to reach the presidential and parliamentary elections that will mark the beginning of a new phase for the Libyan people towards achieving peace and stability, restoring the state's pillars and ending the chaos of the spread of terrorist groups.

According to the spokesman, the two sides agreed on continuing consultation and joint coordination in this regard. Sisi and Johnson also agreed on the importance of pushing collective international action at this stage towards the resumption of negotiations between the Palestinian and Israeli sides.

Furthermore, Sisi and Johnsondiscussed the issue of the Renaissance Dam, where President Sisi stressed the utmost importance of the water issue for the Egyptianpeople as a matter of national security.

Sisi asserted that Egypt adheres to its water rights and calls forreaching a legal agreement that guarantees clear rules for the process of filling and operating the dam and achieving the common interests of all parties.

The spokesman added that "the communication further discussed some issues related to bilateral relations, especially on the security, military, commercial and tourism levels, in light of the growing relations between the two countries during the recent period. Johnson affirmed Britain's keenness to develop cooperation with Egypt in various fields ."

In July, the Egyptian House of Representatives has authorized President Abdel Fattah El-Sisi to “take necessary measures” to protect national security, giving a green light for the president to send troops to Libya.

A week earlier, Sisi said at a meeting with Libyan tribal chiefs in Egypt that any Egyptian military intervention in Libya may only materialize upon a request by the Libyan people and a permission from the Egyptian House.

According to Article 152 of the Egyptian constitution, the state has to seek the Parliament’s approval before declaring war or sending its forces in combat missions.

The members attending the session are not authorized to disclose any details of the discussion inside this secret meeting.

During his meeting with the tribal chiefs on July 16, Sisi said Egypt has always stood by a peaceful solution in Libya through encouraging negotiations between Libyan factions. However, it will not stand idly as it watches activities that threaten Egypt’s national security.

“Egypt has the strongest Army in the region and Africa,” he said, adding that it is, however, wise and does not assail or invade other territories.

He noted that in case the Egyptian forces entered Libya, they will be led by tribal leaders carrying the Libyan flag. He added that the army intervention in Libya has to be approved by the Egyptian House of Representatives.

Sisi promised that Egypt will intervene "only at the Libyans' request and withdraw upon their order.”