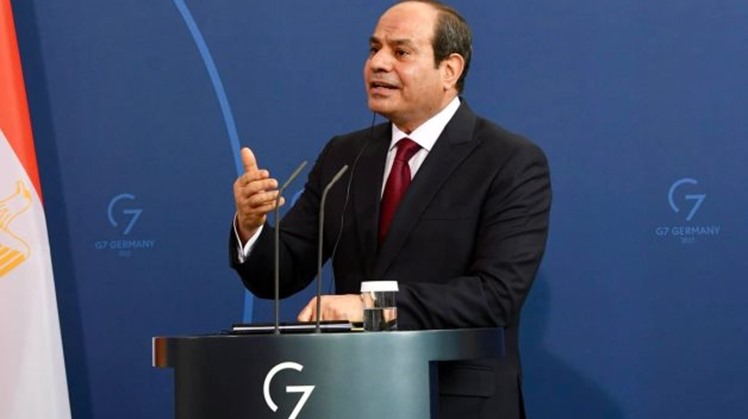 Tue, Dec. 13, 2022
CAIRO – 13 December 2022: Egypt’s President Abdel Fattah al Sisi will have an extensive schedule during attending the US-African summit in Washington According to Ambassador Ahmed Abu Zeid, spokesperson for the Ministry of Foreign Affairs, Tuesday.

He added during televised statements that the summit will include bilateral meetings and several opportunities for discussions among leaders in various sectors.

Abu Zeid explained that “this summit is the second of its kind, as it was held for the first time in 2014, during the presidential term of Barack Obama's administration.

He noted that the current U.S. President Joe Biden is showing a great interest in the African continent, in a completely new strategy towards Africa.

Ambassador Ahmed Abu Zeid said in his statements that The American side is keen to focus on the African development plan adopted by the African Union, “as it will attract a lot of discussions during that summit.” He added.

The spokesperson also confirmed that Egypt’s stances are mostly consistent with itself, regardless the partner we are discussing whether it was China or the United States, noting that there are several common issues to discuss during summits and meetings, including food and water security.

Regarding the Grand Ethiopian Renaissance Dam (GERD) file, Abu Zeid reiterated Egypt’s commitment to reaching a binding legal agreement on filling and operating this dam. He noted that “there are some attempts by different parties to pushing the situation, however there isn’t any noticeable movement."

On the Russian-Ukrainian war, Ambassador Ahmed Abu Zeid said that the military conflict has changed the international system.

He pointed out that the Egyptian stance thinks that this crisis and its continuation harms many countries, mostly both Arab and African countries, which are not involved in the conflict, however, deeply affected with it."

Last July, The U.S. Embassy in Cairo announced that during the meetings held by Special Envoy to the Horn of Africa Mike Hammer with senior Egyptian officials, Chargé d’Affaires Nicole Shampaine delivered an invitation from the White House to President Abdel Fatah Al-Sisi to participate in the U.S.-Africa Leaders Summit scheduled for December 13-15, 2022.

Hammer met with senior Egyptian government officials on July 25 to advance a diplomatic resolution on the Grand Ethiopian Renaissance Dam (GERD) that supports the water needs, economy, and livelihood of all Egyptians, Sudanese, and Ethiopians.

“I came to Cairo on my first official trip to the region to hear from our Egyptian partners on the critical issue of the Grand Ethiopian Renaissance Dam and to better understand Egypt’s water needs,” Special Envoy Hammer said.

“We are actively engaged in supporting a diplomatic way forward under the African Union’s auspices that arrives at an agreement that provides for the long-term needs of every citizen along the Nile.” Hammer added.

US President Joe Biden is set to play host to dozens of African leaders in Washington this week as the White House looks to narrow a gaping trust gap with Africa — one that has grown wider over years of frustration about America’s commitment to the continent, the Associated Press reported.

In the lead-up to the three-day US-Africa Leaders’ Summit that begins Tuesday, Biden administration officials played down their increasing concern about the clout of China and Russia in Africa, which is home to more than 1.3 billion people. Instead, administration officials tried to put the focus on their efforts to improve cooperation with African leaders.

“This summit is an opportunity to deepen the many partnerships we have on the African continent,” White House press secretary Karine Jean-Pierre said when asked about the shadow that China and Russia cast on the meetings. “We will focus on our efforts to strengthen these partnerships across a wide range of sectors spanning from businesses to health to peace and security, but our focus will be on Africa next week.”