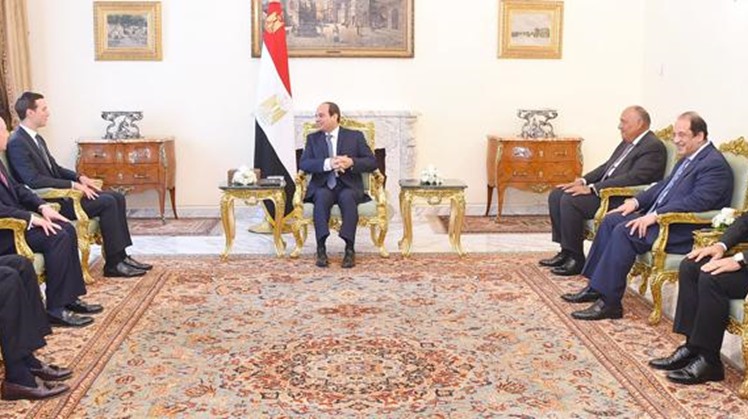 Ambassador Bassam Radhi, Spokesman for the Presidency stated that the President affirmed during the meeting the strength and solidity of the established strategic relations between Egypt and the United States, noting the keenness to continue upgrading them in all fields, as well as continuing coordination and consultation with the US administration on ways to establish peace and stability in the Middle East region, especially in the light of the instability in the region and the many crises it is experiencing.

Radi added that Kushner conveyed the greetings of US President Donald Trump to the President, stressing the importance of the Egyptian-American relations and his aspiration to support the efforts of its development at various levels.

He praised the important role and efforts exerted by Egypt to strengthen the foundations of stability and peace in the region and combating terrorism and extremism, praising the Egyptian government's success in stabilizing Egypt despite the regional situation.

Jared Kouchner reviewed the US contacts with the various parties in the region in an attempt to push forward efforts to re-track the negotiations between the Palestinian and Israeli sides, stressing the great importance that his country attaches to consultation with Egypt in this context as a center of gravity for the Middle East region, and has a long and accumulated experience in dealing with all concerned parties in this regard.

The President affirmed that Egypt supports all efforts aimed at reaching a just and comprehensive solution to the Palestinian issue and pushing forward the efforts to revive the peace process between the Palestinian and Israeli sides in accordance with the international terms of reference and the establishment of a Palestinian state with East Jerusalem as its capital. In order to to restore peace and open a new horizons for the Middle East and the peoples of the region.