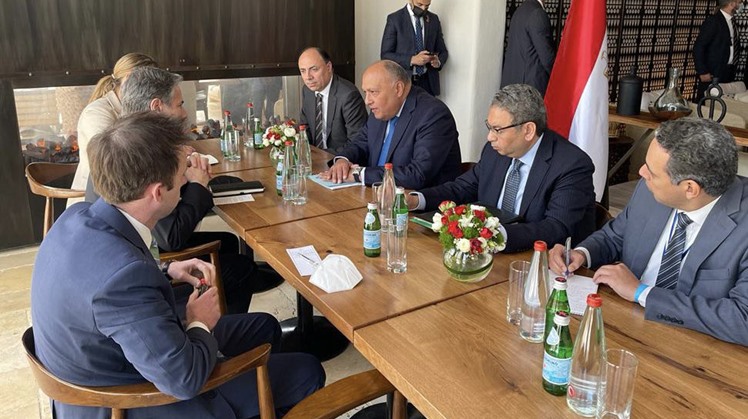 Tue, Mar. 29, 2022
CAIRO – 28 March 2022: Egypt’s Foreign Minister Sameh Shoukry discussed with US Secretary of State Antony Blinken during a meeting on Monday several international and regional issues of mutual concern on the sidelines of his visit to Israel.

Spokesman for the Foreign Ministry Ahmed Hafez tweeted that "On the sidelines of his visit to Israel, minister Shoukry met with his US counterpart Antony Blinken to tackle a number of international and regional issues as part of maintaining consultation and coordination concerning issues of joint interest."

Egypt’s Foreign Minister Sameh Shoukry said that the six-part meeting in Israel [Negev summit] aimed at addressing challenges in the region, and to promote peace.

He added in a joint press conference Monday, with counterparts of UAE, Morocco, Bahrain, Israel and US that the participants at the summit stressed the importance of the peace process between Palestinians and Israelis and to face all challenges in the Middle East region.

Shoukry affirmed Egypt’s supporting stance for the two-state solution based on the 1967 borders.

According to spokesman for the Foreign Minister Ahmed Hafez, Shoukry arrived in Israel, Sunday to participate in the six-way meeting, grouping the foreign ministers of the United Arab Emirates (UAE), Morocco and Bahrain along with US Secretary of State Anthony Blinken and Israeli Foreign Minister Yair Lapid.

During the visit, Shoukry met with his Israeli counterpart.